How do I set up approvers?

If you still have questions or prefer to get help directly from an agent, please submit a request.
We’ll get back to you as soon as possible.

This applies to the following countries

Findity offers a variety of different ways of approval structures. In this article we aim to describe the basics of what you are able to do and also step by step guides to common scenarios.

First of all Approval needs to be activated in Marketplace. 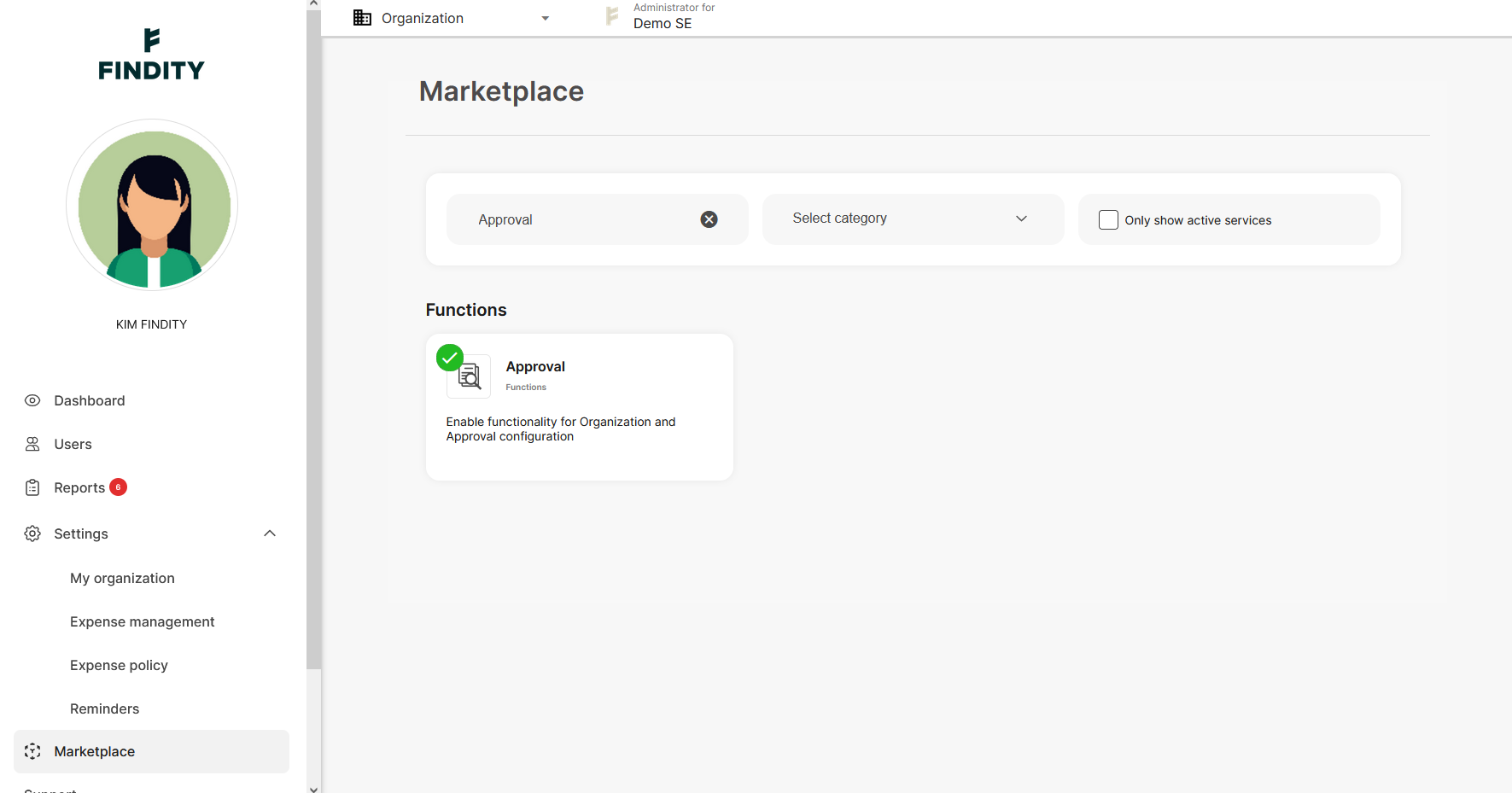 Let's start with having a look at the default page of Approval which contains three different boxes, Approval settings, Approval structure and Temporary approvers. 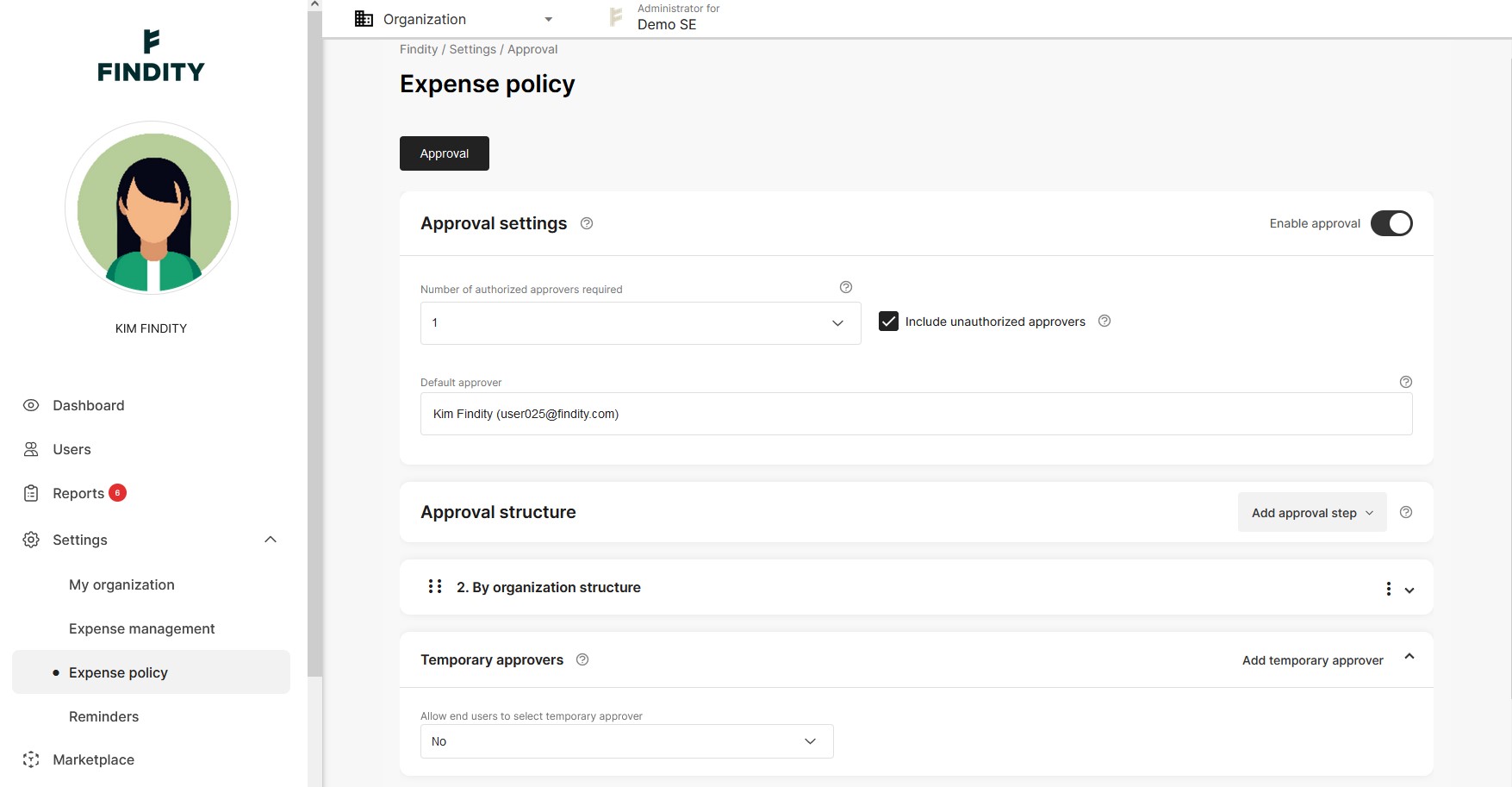 Number of authorized approvers required
In many cases only one approver is necessary but it is also common that more than one person will do the approving. Let's say you work as a sales person, your expenses will be approved by the sales manager. When the sales manager has approved, the CEO makes the last call and approves what the Sales manager has approved. In this case the company has 2 approval steps and two persons need to approve. You can have up to 3 approval steps.

Include unauthorized approvers
If this option is enabled all approvers will get a notification even if the approver doesn't qualify.

It is also possible to combine organization structure and dimension. Let's say every user belongs to a department but the company has a lot of projects going on. Then set up a dimension named Projects and let the users choose from a list of ongoing projects. Every project has its own approver. If the user doesn't choose a project (leaves that field empty) the expense will be approved by the approver of the department. See Approval structure tab for more info.

If there is only going to be one user approving everyones expense reports it's a fast and easy setup. Go to Organization mode and then Settings -> Expense policy in the left menu. Enable Expense policy with the toggle to the right. 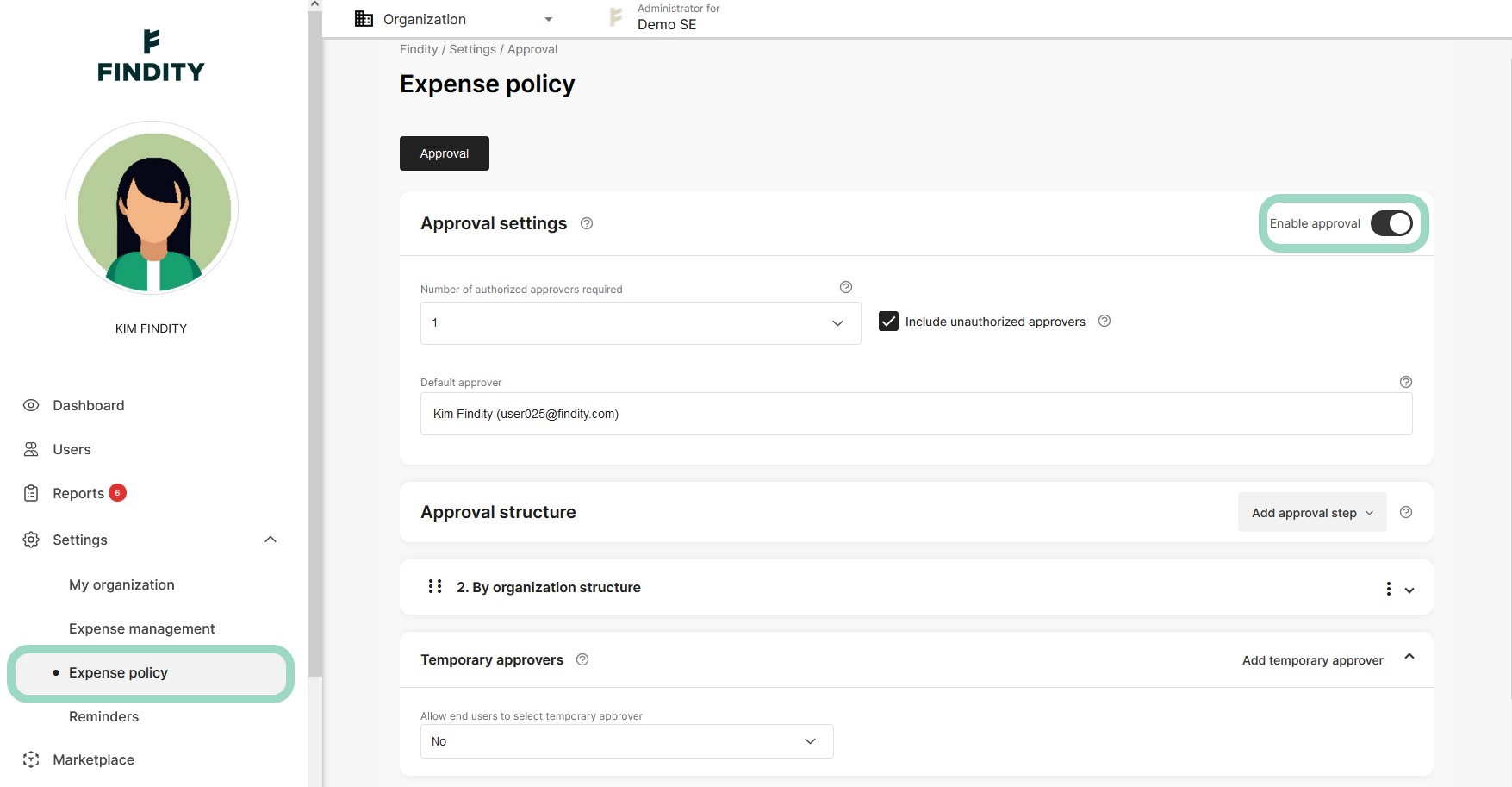 Now you're done, don't forget to save!

As preperation to setting up this approval structure you need to have set up the department structure or set up a dimension to use. So what is the limitations and benefits of dimension setup versus department setup?

If you have a fairly static approval structure with the immediate supervisor as the approver this is the best option. Of course a department can be named anything you want so if it suits your organization better feel free to not use the actual departments names.

If you need more flexibilty dimensions offer you just that. You can set a default value based on the dimension on each user or you can have the users choosing a dimension value each time they make an expense. Letting the users choose value comes very handy if you have work with project, either as follow up on costs or, as in this case, determining who will approve an expense.

In comon for both department and dimension approval structure is that you can have up to 3 approval steps and you can have amount limits on each step. More on that in the Multiple approvers and Amount limit tabs.

The setup of department and dimension approval structure is the same. In the guide we will show you how to set up departments but just choose dimension in step 2 if that suits you better.

A combination of department and dimension

It's possible to have a combination of department and dimension for the approval structure. You can add several dimension if you like, we will limit ourselves to one dimension in this guide. We will start off where we left, with departments being in place.

We begin with the Approval settings box.

You can choose 1, 2 or 3 approvers and it referres to the number of approval steps needed. For an example, if a sales person sends in an expense and the Sales manager approves and then the Head of division approves, two approval steps are needed. If the CEO needs to approve what the Head of division has approved you have three approval steps. The number of steps is the same for all departments or dimensions.If a department or dimension is missing an approver on one step the expense will go to the approver of the organization or the default approver.

Let's say you have one approval step but the approver has a amount limit of 100 euros (see Amount limit tab for more info). If an expense is sent in with a higher value, i.e. 150 euros, the approver is not authorized to approve and the expense will be sent to the next approver.

A Default approver is always needed.

Now let's turn our eyes to the Approval structure box. Let's say we have choosen two approval steps. Under Approver 1 and Approver 2 you add the approvers for each departments (or dimensions if that's your choice). In this example users belonging to a department will be approved by Anton Approver as the first step and then Kim Findity as a second step. Except for the Sales department where Approver 2 is missing and the second approval step will go to the Default approver.

If you have two or more persons who can make an approval within the same approval step you might set that up as well. When an expense report is sent in all approvers in that step will get a notification. Not all need to approve though, the first approver that approves will move the expense report to the next approval step.

In the below example with the Engineering department both Anton and Dave will get the chance to approve an expense report but it only takes one of them to move the expense report to Kim in the next approval step.

Some approvers might have a limit on how big of expenses they can approve. To set this up you add the limit on the approval step. So let's say we have one approval step but that step has a 1000 SEK limit. What happens if the expense is of greater value of 1000 SEK?

Scenario: One approver if below 1000 SEK, but two approvers if above 1000 SEK 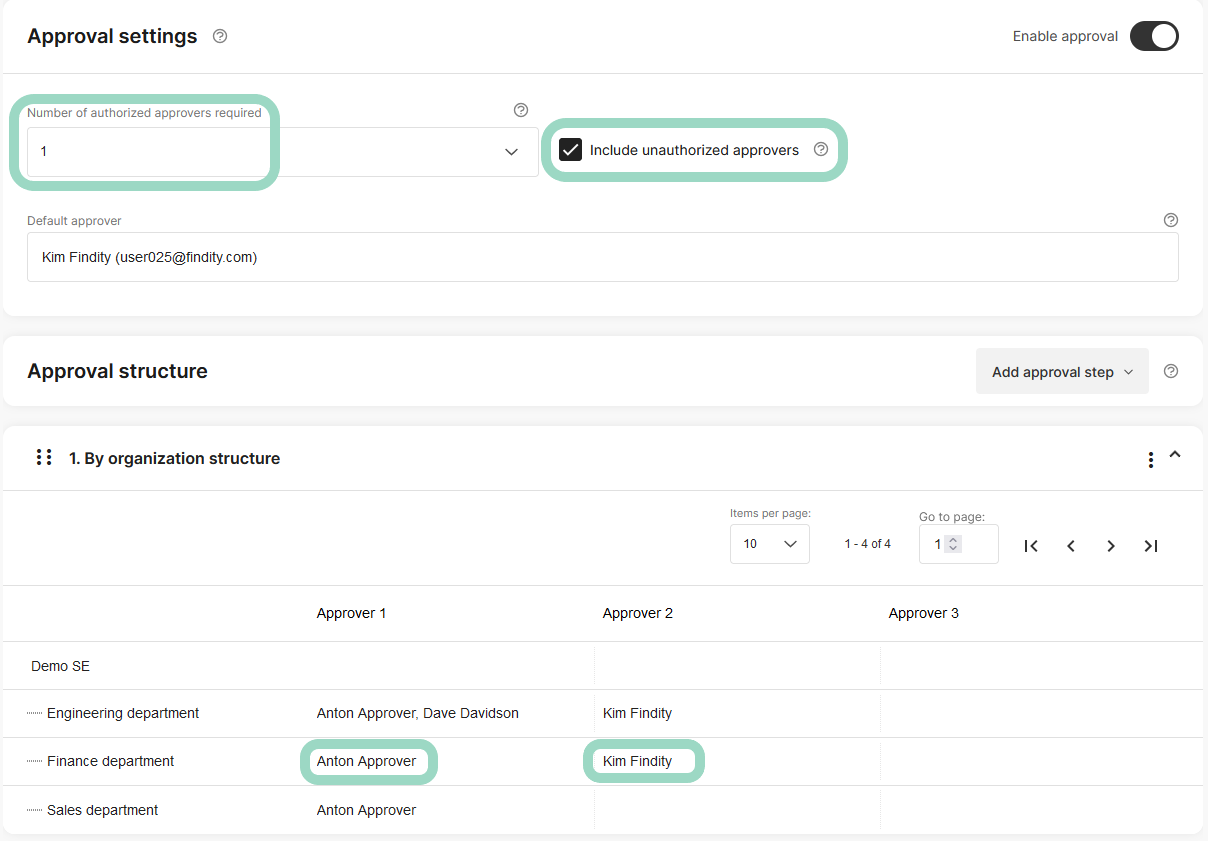 When setting up Anton as the Approver 1 we add the amount limit in Max amount (currency will differ depending on your organization's setup). If we would have more approvers in this approval step, all would be bound by the amount limit. 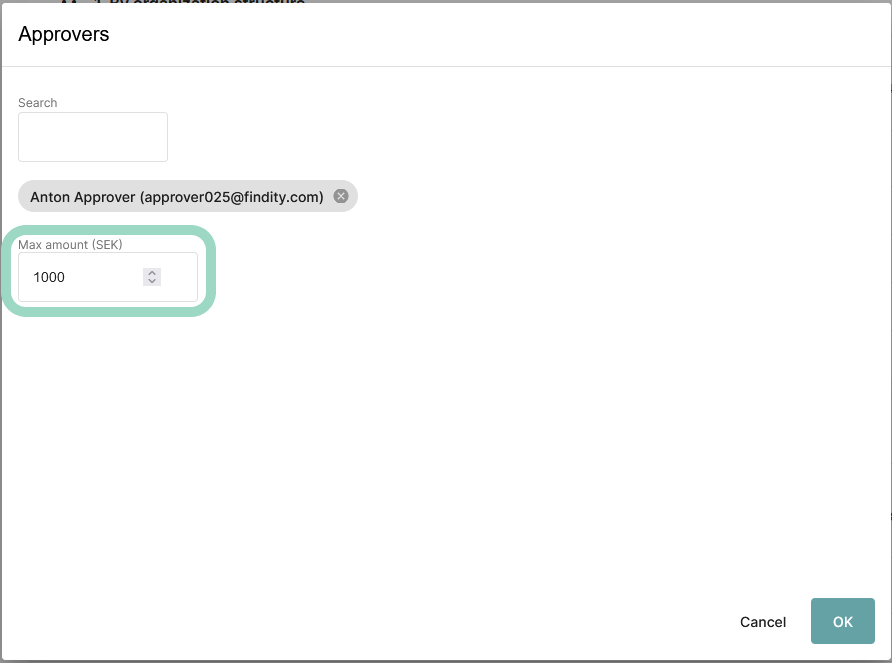 And now we're done. Don't forget to Save.